The second half of the 14th century in Europe of that time was marked by deep crisis in economy and society. In years 1378 – 1417 the crisis was even stronger because of the papal schism, a situation in which there were two or even three appointed popes fighting for the leadership of the church. This situation led to several attempts to reform the church, or more precisely the whole feudal society. The most successful of them was the Hussite movement which ushered far wider turbulence which followed as German reformation a hundred years later.

The Hussite movement arose primarily in order to reform the Catholic Church and was based on the ideas of an important Czech preacher, scholar and theologian Jan Hus. In a short time the movement spread mainly within inner Bohemia, less then also within neighbouring Bohemian Crown Lands, and reached its peak in the form of revolutionary events during the years 1419 – 1434/36.

Among the followers of the Hussite movement there were mainly Czech burghers, knights, common rural people and the poor. In order to defend against the external (Catholic Church, pope, king and later emperor Sigismund of Luxemburg and by them organized crusades) as well as the internal enemy (Catholic noblemen, Church and their followers) the Hussites created considerable military power and well thought-out fighting tactics. They kept winning even after the death of the leading personality of the revolution and allegedly never defeated commander Jan Žižka († 1424).

Also all four crusades 1420, 1421/22, 1427, 1431 ended as failures of the enemies. First the negotiations of both parties (in Basel 1433) and gradual inner rupture between the Hussites helped to bring the conflict to its end (Lipany 1434, acknowledgment of the Compactata in 1436 by Sigismund of Luxemburg).

The successes of the Hussites who were led by the preacher and skilful strategist Prokop the Great in the battles of Ustí nad Labem 1426 and of Světlá 1427 which helped to take the burden of the war outside the area of Bohemia. The Hussites were sending campaigns to the neighbouring countries (Hussite raids) in order to plunder and spread the ideas.

This daring raised especially in German areas intensified interest to take strong action against them. Roman, Hungarian and formally Bohemian King Sigismund of Luxemburg as a forethoughtful monarch was after the previous defeats in the 1st and 2nd Crusades rather sceptical about similar ideas, moreover he was occupied with the situation in Hungary. The initiative was therefore seized by Brandenburg margrave Friedrich I from the House of Hohenzollern who succeeded in persuading the pope to declare the 3rd Crusade.

He was forced to compensate the small interest of the noblemen in this campaign by hiring common peasants. When in the midsummer 1427 this crusade army invaded South Western Bohemia, the joint troops of the landfried of Pilsen numbered approximately 25,000 men. From the beginning, however, they were rather paralyzed by the disputes between Friedrich and the archbishop of Trier Otto of Ziegenhain who was appointed as the high command.

The crusaders’ confidence was even weakened by the unsuccessful siege of the Hussite town of Stříbro (Mies) from where the invaders moved back towards Tachov after finding out about the coming Hussite troops led by Prokop the Great.

Course of the Battle of Tachov

The crusaders decided to place their camp to the North of the town of Tachov and they waited for the arrival of the enemy. In order to slow down their advance and to gain time for preparation of the battle, they sent on 2nd August against the Hussites 3,000 of their riders led by Henry of Plauen.

These, however, returned in the evening of the same day without even trying to attack the Hussites. A day later, before the battle itself could start, the omnipresent fear and demoralization within the crusade army brought its effect. Gradually, there were more and more crusade troops leaving their positions and fleeing towards the borders.

When on 4th August the Hussite army finally arrived to Tachov, they found a nearly empty camp and then it was easy to defeat the rest of the rear-guard. A bit more tougher resistance was put up by the troops of the landfried of Pilsen who withdrew behind the city walls, and after a week of siege (11th Aubust) they capitulated.

Likewise in the battle of Domažlice four years later the fights near Tachov were without any heavier casualties. We can consider those on the side of the Hussites as insignificant, on the side of the Crusaders, especially within the troop so the landfried of Pilsen, they could be counted in hundreds.

A similar number would probably be for those who were captured by the Hussites. The fate of the 3rd Crusade proves what kind of respect the Hussite warriors had abroad. The aura of their invincibility arouse by the enemies panic fear and was able to win the battles with the same efficiency as the Hussite arms and tactics.

The easy defeat of the 3rd Crusade strengthened within the Hussite movement the hegemony of the radicals – Hussites from Tábor, the Sirotci and their field troops. The most powerful representative of revolutionary Bohemia was the leader of the the Taborits and the winner of the battle of Tachov, Prokop the Great, the radical side strengthened for some time even their positions in Prague.

The burden of fights and the war suffering was moved from Bohemia behind its borders. Wide areas of Bavaria, Pfalz, Saxon, Lusatia, Silesia, Moravia or today’s Slovakia, which were most frequently aims of the Hussite raids got to know very cruel times. From the point of view of the military forces the Hussites reached their peak which lasted till the early 1430s. 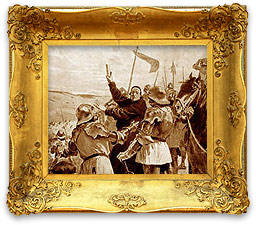 (* ca. 1380 – † Lipany 1434),
Hussite priest, politician and commander (in years 1426 – 34 leader of the Taborits). He came from a rich patriciate of Prague, as a young merchant he travelled around a large part of Europe, gained university education and became a priest. After the death of Jan Žižka he can be considered as a high representative of the Taborits to be the main political authority of the Bohemian Kingdom.

(* ca. 1380 – † 1430),
Imperial elector – archbishop of Trier (since 1418). He came from a Hessian dynasty of a count, as one of the most important representatives of the Catholic Church in Germany he was one of the followers of the inner reformation of the church, he became famous also for his anti-Semitic actions. He took part in the unsuccessful 3rd Crusade against the Hussites in 1427 as its commander-in-chief.

Friedrich I of Brandenburg

(* 1371 – † 1440),
Imperial elector – margrave of Brandenburg (since 1415). For his alliance he received from Sigismund of Luxemburg in 1415 as the first one from the House of Hohenzollern (since 1701 Prussian kings and later 1871 – 1918 German Emperors!) the Brandenburg Margraviate. At the same time this was freed from the union of the Bohemian Crown Lands with which it was loosely united since 1373. He commanded the unsuccessful crusades against the Hussites which were defeated near Tachov 1427 and near Domažlice 1431. 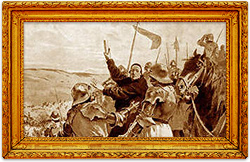 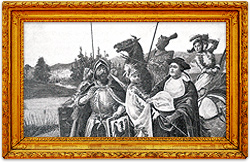