Battle on the Marchfeld

The 13th century presented in the history of Western and Central Europe a period of a relatively fast economic development which was accompanied by a population growth. As a consequence of the German colonization, feudalization and spreading of the Western culture it came, among others, to closer links between the area of Central Eastern Europe (Poland, Bohemian Lands, Kingdom of Hungary and the Baltics) and the Western European cultural area. Unlike Poland and the Kingdom of Hungary, the Bohemian Lands were not later strongly affected by Tatar invasions.

The reign of the last Přemyslid Dynasty can, therefore, be linked with the economic stabilization and also foreign political strengthening of the influence of the Bohemian State. This applies twice as more to the period of the reign of king Ottokar II of Bohemia (1253 – 1278), which was in addition linked with the expansionary tendencies aimed especially at the South Austrian Lands.

Their major part was controlled by the local House of Babenberg, which however, towards the mid-13th century became extinct in the male line. Ottokar smartly took advantage of this crisis and gained the local nobility for his side who then elected him to their sovereign. He then also consolidated the legitimacy of the election by marrying the heiress of the Babenberg territorial possessions, Markéta of Babenberg.

He did not mind that she was thirty years older, not really a beauty and not able to give him an offspring (the marriage was after several years annulled at her request). He, at first, defended his claims to the reign of the Austrian Lands by the victory in fights against Hungarian king Béla IV (Battle of Kressenbrunn 1260) and later (1269) he enlarged his territorial possessions with Carinthia and Carniola, thanks to which they reached the Adriatic Sea.

Ottokar II of Bohemia became the most powerful monarch in Central Europe and in 1273 he even attempted to gain the crown of the Holy Roman Empire. The local princes got, however, scared of the risk of losing their sovereignty and rather elected the opposing candidate from the less powerful and less important Count House of Habsburg – Rudolf I.

Ottokar did not accept this election, to which the Bohemian king was not even invited. Similarly, the newly elected Roman king did not long for peace and disputed the legitimacy of Ottokar’s rule over the Austrian Lands.

Their dispute escalated in 1276 into an open war. Thanks to by Rudolf supported and well-timed rebellion of some important Bohemian aristocratic families (the Vítkovci etc.) the Roman king gained the upper hand, militarily took control over the Austrian territorial possessions and forced the Bohemian king to conclude peace in Vienna. However, this only was Ottokar’s attempt to gain some time for preparation of revenge.

The crucial clash was supposed to take place and it also did two years later, in 1278. Both belligerents, for this purpose, made a considerable diplomatic effort when gaining the allies. The most important one was the young, only sixteen-year-old king Ladislaus IV of Hungary, called Cuman, who categorically stood on the side of Rudolf.

At the turn of July and August the troops of both belligerents started advancing. There was not a stronger difference between their powers, the Ottokar’s army (altogether about 25,000 men) relied more on their heavy cavalry, Rudolf’s Hungarian allies had larger light cavarly. After smaller clashes towards the end of August both armies stood against each other at the village of Suché Krůty (Dürnkrut) in the area called Marchfeld (close to the right bank of the river Morava on the area of today’s Austrian State Lower Austria).

They built their camps approximately 5-6 km far from each other on the plain by the river Morava. One of the biggest and bloodiest clashes of the cavalry in Europe in the 13th century was about to start.

Course of the Battle on the Marchfeld

After two days of waiting on 26th August 1278 Rudolf took advantage of the moment when a part of Ottokar’s army was not present at its camp because of the replenishing of the stock, and in the morning hours attacked. The fast Hungarian cavalry was the first to start the attack from the left and occupied the defense on the right wing of Ottokar’s cavalry.

Short after that it came to a frontal clash of the mid-armies whose commanders were Rudolf I and Ottokar II of Bohemia themselves. For a long time there was no winner of the fierce fight, and Rudolf himself was pulled down of his horse but quickly saved by his own people. The pressure from the Hungarians on the right Ottokar’s wing caused gradual turn of the fighting line so that Ottokar’s troops did not have their own camp at their back any more, but the river Morava instead. A key turning point was the moment when Rudolf deployed his reserves against the right wing which was growing weak.

The reserves of Ottokar’s army led by, among others, Bohemian nobleman Milota of Dědice instead of trying to reinforce the disrupted defense did not step in the fights and reputedly ran away. Earlier even Milota’s and some other Bohemian noblemen’s alleged betrayal was speculated (this opinion, however, is considered to be overthrown by most of the present historians).

The core of the Bohemian army got into encirclement, which meant that the whole battle was lost. In the arisen massacre thousands of Ottokar’s soldiers, major part of the elite of Bohemian knights and the Iron and Golden King himself, found their deaths either under the arms of the enemies or in the water of the river Morava!

Rudolf took control of the battlefield and added to his credit the biggest war success of his illustrious political career. Without any doubts the battle claimed for the current times extraordinarily high number of victims. Some estimations even speak of 12,000 killed on the Bohemian side (which would be approximately the half of the original number!).

For the winning side we lack any more particular estimation. As in most of the battles which took place on the European area in the times of the High Middle Ages (ca. 11th – 14th century) the key role was played by the heavy cavalry. It created the core of both armies. It was its readiness, personal heroism and morale that were the most important for the result of the then war conflicts.

The situation of the battle on the Marchfeld was not different. It is hard to say what the result would have been in case of a successful deployment of the Bohemian reserves instead of their running away from the battle field. Probably even their action would not have been able to change the result, but it could have prevented the battle from becoming such a huge massacre and it might have even prevented the death of one of the most important rulers of the Bohemian history.

After the victory Rudolf with his army took control of major part of Moravia, which he then ruled for five years. His intention to take control also of Bohemia was stopped by the opposition of the local noblemen and Otto of Brandenburg, earlier a loyal ally of Ottokar II of Bohemia, at that time legal guardian of his under-aged son Wenceslaus.

The rule of Otto of Brandenburg in Bohemian Lands entered the history as a time of pillaging and constant in-fighting accompanied by the rise of the nobility’s power and sovereignty (e.g. the Vítkovci and Zavis of Falkenstein). The turn did not come up until 1283 when Wenceslaus II came back. Until that time he was interned by his guardian at the Castle of Bezděz and later in Brandenburg. The young king succeeded with skillful and resolute policy in overcoming this protracted crisis and in reestablishing the integrity and prosperity of the state.

The defeat on the Marchfeld cannot from the long-term point of view be considered as a fatal stroke in Bohemian history. In its consequences it, for one decade, innerly destabilized the Bohemian state and removed it from its position of a strong participant in power games.

The unsuccessful attempt to expand to the South was after the restoration of the power and authority of the Bohemian kings, Wenceslaus II, John of Bohemia and Charles IV changed for expansion to the North: to Poland (Silesia), Lusatia, Egerland etc. It did not come to the conclusion of the union between Bohemian and Austrian Lands until 1526, which was, however, under the reign of the Habsburg Dynasty. 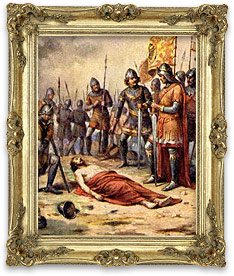 (*ca. 1233 – † Moravské pole 1278),
Bohemian king from the Dynasty of Přemislid (reigned from 1253, crowned in 1261). In the time of his reign he was considered to be the most powerful Central European monarch. He gained the renown with his wisdom, sense for honesty, but also with his fortune and military courage; that is why he is called the Iron and Golden King.

His rise was accompanied by the rebellion against his own father, Bohemian king Wenceslaus I, marriage policy (heiress of the Babenberg territorial properties, Markéta, and later also Hungarian princess Kunhuta), victory over the Hungarian king Bela IV in the fight over Austrian Lands and especially then with the bloom of the Bohemian Lands.

From the beginning of the 1270s his star started to set in favour of his major rival Rudolf I of Habsburg. At first he was not successful in the fight against Rudolf I for the Imperial throne (1273) and then also in the fight for Austrian inheritance. Eventually, he met his end in this conflict and died in the crucial Battle on the Marchfeld.

Armies of the Roman Emperor and the King of Hungary

Rudolf I of Habsburg

(*1218 – † 1291),
Roman king (since 1273) and later also Austrian and Corinthian duke. He came from an old count Dynasty of Habsburg, which in that time resided in the area of today’s German Swiss borders. The reason why he was elected to the Imperial king in 1273 was the fear of the major part of electors from the power and authority of his opposing candidate Ottokar II of Bohemia.

With this an open hostility of both monarchs started, and it reached its peak in the fight for the former Babenberg heritage – Austrian Lands. Thanks to his decisive advancement Rudolf succeeded in gaining control over them and this success was sealed in 1278 with the victory in the Battle on the Marchfeld. As a politician and warrior he became famous for his courage and ruthlessness. In this way he built the basis of great power of Habsburgs which relied on from that time newly controlled Austrian territorial possessions.

(*1262 – † 1290),
Hungarian and Croatian king (since 1272). The son of Hungarian king Stephen V and Cuman princess Elizabeth. He got his nickname “Cuman” thanks to his unrestrained life and affection to the wild pagan marauders from the East of the same name, whose military service he liked to use.

In the open hostility and fights between the Bohemian king and the Imperial emperor he categorically put himself on the side of Rudolf the Habsburg and he significantly helped him to win in the Battle on the Marchfeld. In his late short life he faced the displeasure of the pope and also home opposition, on whose impulse he was murdered in 1290. 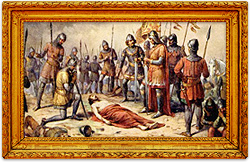 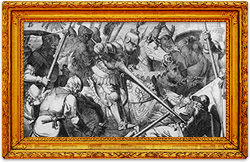